Check Price
SoundGuys is reader supported. When you buy through links on our site we may earn an affiliate commission. Learn More.

Noise-induced hearing loss: What is it and how to prevent it

Crank the volume too much and eventually the world goes quiet

You just caught word of a promotion and leave the office with your back straight, a spring in your step, and Walking On Sunshine blaring through your headphones: you’re validated with purpose. Unfortunately, there’s a good chance that noise-induced hearing loss (NIHL) can put a damper on your lifted mood.

Oftentimes, noise-induced hearing loss is an unwittingly self-inflicted ailment. Whether you’ve attended one too many concerts sans earplugs, pumped up the volume on your in-ears to block out office chatter, or just indulged in an angst-ridden moment of flipping through old yearbooks while blasting Bon Iver’s Skinny Love—hmm, maybe that one’s a bit too specific; you get the gist—noise-induced hearing loss is a mostly-preventable malady.

Editor’s note: this article was updated on August 30, 2021, to add a contents menu and to include information about hearing aids and volume limiters.

How do we end up with noise-induced hearing loss?

Well, according to an article written by Kurabi, et al. in Hearing Research, intense sound from occupational and recreational over-stimulation is a significant cause of hearing loss; specifically, it’s usually a result of irreparable damage to the hair cells—or stereocilia. An extreme instance of cochlear over-stimulation is blast exposure.

Freepik You can expand the reach of your outer ear by placing your hand next to it.

Though military personnel and construction workers may be more prone to blast exposure, the average person isn’t. So how does this usually occur? Repeated prolonged exposure, which is bad news Bears for us audiophiles and enthusiasts. Loud noises essentially abuse cochlear cells, which—much like the self-esteem of your average teenager—are easily damaged. Once the damage has been inflicted, signals can no longer be transmitted to your brain and the cells are rendered useless.

In extreme cases, this initiates apoptosis—or programmed cell death. Yes, this process is as metal as it sounds. Kurabi et al. posit that ineffectual cells will disassemble themselves into neat packages for other cells—phagocytes—to engulf. Although this sounds scary, there are ways to prevent noise-induced hearing loss.

Damage to the stereocilia from repeated and prolonged exposure is irreversible.

The mechanics of the human ear

To understand how this all works, we need to know how your ears are put together.

The outer ear is, well, on the outside. If you want to get technical, an important part of it is called the pinna and. The outer ear functions to transmit sound from the environment into the internal parts of the ear. Ever try to pour something into a flask? It’s a struggle to pour from a bottle directly into a flask, but a funnel makes the process much easier.

Fun fact: Circumaural (over-ear) headphones take advantage of the pinna’s asymmetrical shape to simulate a more natural reproduction of sound compared to on-ear and in-ear headphones. A report on the human ear by Barry Jacobson of MIT states that the folds of the pinna allow for various sounds to have unique spectral characteristics. As it applies to headphones, the pinna is to credit for over-ear headphones’ greater soundstage.

Once the sound is funneled from the outer ear to the middle ear, it vibrates the eardrum (tympanic membrane) which then interacts with three bones: the malleus, incus, and stapes—often referred to as the hammer, anvil, and stirrup, respectively. However, the organ that actually converts the sound waves into electrochemical impulses for our brains is called the cochlea.

Noise-induced hearing loss is usually a result of damage to the stereocilia, which are located in the organ of the Corti. This organ rests inside the cochlea.

Now, the snail-shaped cochlea is a fluid-filled structure. Why fluid? Because particles are much more condensed and can travel four times faster than in air. This brings us back to Jacobson’s MIT report which explains is why we have those three bones in the middle ear; they’re mechanically designed to provide enough power to transform the vibrations.

Inside the cochlea is the organ of Corti where we find hair cells, stereocilia, that move back and forth—think of a full stadium doing “the wave.” This movement sets off a chain of chemical reactions that result in neurotransmitters that stimulate the auditory nerve to fire. From here, the impulse travels to the brain where it’s interpreted as sound.

What you should know about sound intensity

We measure the intensity of a sound in decibels; this operates on a logarithmic scale rather than a linear one. If you don’t feel like dusting off that high school algebra book, it means that 20dB is 10 times greater than the sound pressure level (SPL) of 10dB. Though it’s 10 times the raw force, our brains only register this as a difference of two-times perceived loudness. 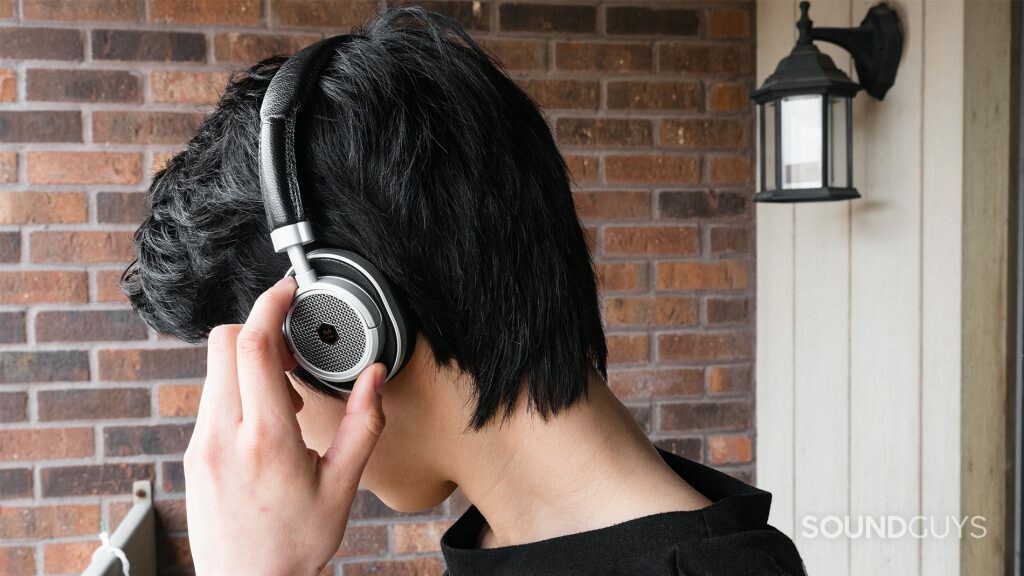 It’s easy to turn the other cheek to noise-induced hearing loss and increase the volume anyway.

That’s pretty scary. Relating it back to sound, this means that you may think you’re not turning the volume up too much, but really, you’re slowly degrading the functionality of your stereocilia.

An accepted rule of thumb is that prolonged exposure to 85dB is cause for noise-induced hearing loss. The AHSA distinguishes dangerous and safe noise levels by decibel; here are three ranges worth discussing.

According to NIOSH, the maximum exposure time for 85dBA is eight hours. Even then, we advise that you stay at much lower volume levels with your music.

Can you avoid noise-induced hearing loss?

Earplugs are an effective form of hearing loss prevention and a must-have for concert-goers.

Aside from plugging your ears and avoiding concerts at all costs, there are reasonable ways to prevent hearing loss. Since we’re a site all about audio products, we recommend that you have different headphones for different uses. In-ears will do a great job passively blocking out ambient noise without compelling you to pump the volume as much as over-ear headphones might. But more on that later. For now…

Bose A good pair of noise cancelling headphones like the Bose QC 45 can help prevent NIHL.

Certain headphones with good passive isolation or noise cancellation can help you avoid hearing loss. Chances are that you know what it’s like to be on a noisy subway car, and if you’re like me, you crank the volume up to drown out your surroundings. When we do this, though, we’re not lessening the surrounding noise. We’re putting our stereocilia at risk of permanent damage. To avoid this, some headsets include volume limiters.

Read on: Can headphones cause tinnitus?

Why do we turn up the music to drown out our surroundings?

Well, it’s actually a phenomenon that we discuss a lot in various reviews and it’s called auditory masking. This is when one sound affects how you perceive another. With the subway example, the loud, low-frequency hum of the subway masks the higher, quieter sounds of your MP3 player.

Turning up the volume on your iPod isn’t a safe solution to handling loud environmental noise.

We could get completely in the weeds regarding psychoacoustics, but all that you really need to know is that our brains have limited bandwidth. We can only process so much auditory information before our brains filter out tertiary sounds. See, our brains evolved to hear a lion’s roar or a child’s scream, not the nuances of your favorite Yo-Yo Ma composition.

What kind of headphones should you buy?

Because the foam tips guarantee a good seal, isolation and ANC are incredibly effective on the Sony WF-1000XM4.

The ability to passively isolate noise is invaluable and allows for the Sony WH-1000M4 to actively attenuate a good chunk of low-end noise and mid-range frequencies, too, which is the best range to block out. Why? Because most of the musical notes we enjoy live at or below 1kHz. If a set of headphones can’t block out noise in this range, chances are very good that it will make your music sound worse—or drive you to crank up the volume to drown it out.

To get an idea of how a fine pair of noise cancelling headphones compare to a set of open-back cans, let’s look at the Audio-Technica ATH-AD900. This headset has an open-back design and isn’t built for noise isolation, making this an extreme comparison. You can see that the line is almost completely red, which indicates that these are incapable of reducing nearly all salient instrumental frequencies. If you were to take the AD900 onto a subway, you’d be endlessly frustrated. In fact, your neighbors would probably be annoyed that they could hear your music, too.

If you’re not sold on active noise cancelling technology but still want to protect your hearing, no worries; there are plenty of effective options out there. For one, the Etymotic Research ER4SR is a smart choice. This does a fabulous job at passively isolating noise due to the cogent seal they create. Etymotic products are easily recognizable due to their protruding shape and triple-flange ear tips.

If this isn’t appealing to you, the Shure AONIC 215 does a great job passively isolating noise. It includes an assortment of interchangeable ear tips, including memory foam.

Next: A guide to hearing aids

Tinnitus is described by Mayo Clinic as the perception of noise or ringing in the ears when no external sound is present; these are also referred to as phantom noises. Tinnitus isn’t a condition in and of itself, rather it’s a symptom of a condition, often age-related hearing loss, an ear injury, or circulatory system disorder. Those experiencing tinnitus report perceived sounds like buzzing, roaring, clicking, hissing, humming, and ringing.

How to set up Bluetooth multipoint on your headphones

Are your headphones or earbuds a health risk?

Balanced vs unbalanced connections—what does it mean and what...

What is a sound card?

How to EQ your Bluetooth headphones with a mobile app

How do noise cancelling headphones work?