Check Price
SoundGuys is reader supported. When you buy through links on our site we may earn an affiliate commission. Learn More.

There are a lot of different wireless gaming headset options on PlayStation 5, so which ones are worth a look?

By SteelSeries
Check Price
It can feel a little lean if you're looking for a multi-platform gaming headset, but this is a well tailored wireless gaming headset for the PlayStation 5. Plus the colors match.
View Full Review
7.8

By Razer
Check Price
For $99 USD, the Razer Barracuda X feels good, sounds good, and works in one way or another on every platform. What more could you want?
View Full Review
8

By Turtle Beach
Check Price
One of the only gaming headsets to support Bluetooth for well under $200 USD, the Turtle Beach Stealth 700 Gen 2 is a compelling package.
View Full Review
7.3

By EPOS
Check Price
The EPOS GTW 270 Hybrid is a big swing, and on a fundamental level it doesn't miss. However, enough quibbles make it a conditional buy.
View Full Review

The Sony PlayStation 5 is still really hard to find, but you can still do a little prep work before you finally nail down your shiny new console. If your heart is set on a new headset, there’s a decent smattering of wireless PlayStation 5 gaming headsets around to scratch that itch. There are also plenty of perfectly great wireless PlayStation 4 headsets that will all work just fine.

Editor’s note: This article was updated on January 20, 2022, to include the Logitech G Pro X Wireless, Logitech GT435 Lightspeed, Logitech G 733 Lightspeed, and EPOS H3PRO Hybrid to the Notable mentions section, to add a contents menu, and to add information about the Sony PULSE 3D Wireless Headset.

What you should know about Sony PlayStation 5 audio

Sony made a lot of changes to its console audio situation when it released the PlayStation 5. The new console features a dedicated audio processor that delivers 3D audio to any compatible headset. Speaking of compatibility, the PlayStation 5 is a lot like the PlayStation 4, in that it accepts most connection methods without issue. The console still doesn’t support Bluetooth, but USB dongles and 3.5mm wired connections through the controller are totally fine. The console also isn’t restrictive like Xbox consoles, so odds are good that any wireless PlayStation 5 headset you buy will work on other platforms.

A wide USB-C dongle like the one with the SteelSeries Arctis 7P will make accessing the other USB port on the front of the console impossible (there are more ports on the back).

However, while the full range of the PlayStation 5’s audio features will work on just about any gaming headset, the reverse isn’t necessarily true. If you own a great gaming headset on PC, with all sorts of software bells and whistles, those added features almost certainly won’t carry over. Just like other consoles, the PlayStation 5 doesn’t support headset companion apps like Razer Synapse or Logitech G Hub, so you won’t be able to use them.

The Arctis 7P handles pretty much all the fundamentals very well. Its mic sounds good. Its audio is largely accurate. Just like most of the headsets in the Arctis line, it features an elastic, ski-goggle style suspension band that’s super comfortable, and its metal frame feels very sturdy.

This wireless PlayStation 5 gaming headset brings two main improvements over the previous model. First off is battery life, where the Arctis 7P manages over 27 hours—a big improvement over the comparatively measly 16 from its predecessor. The other new feature is the headset’s USB-C dongle, which makes it compatible wirelessly with Nintendo Switch (whether it’s docked or undocked) and smartphones with USB-C ports. It also supports 3.5mm connections to anything with a headphone jack. Basically, it’s a solid gaming headset with a premium build, and it works everywhere.

Much like the SteelSeries Arctis 7P, the Razer Barracuda X uses a USB-C dongle to connect to your gaming platform of choice. This wireless PlayStation 5 gaming headset weighs a bit more than 250 grams, which is way lighter than most gaming headsets, and well suited to long gameplay sessions.

The Barracuda X is an example of Razer’s continued efforts to release gaming headsets with a little less flash and a little more substance. It lacks the decorative metal and plastic accents of a headset like the Nari Ultimate, and the colored LEDs of the Kraken Ultimate or any of the other myriad Chroma-supporting devices. Instead, this is a subtler, more anonymous-looking gaming headset—it’s basically a black pair of headphones with a mic sticking out.

However, while the look is fairly anonymous, everything else is pretty great. The Barracuda X offers great audio, a decent microphone, over 25 hours of battery life, and decent isolation. When you add all that up with the connectivity options, $99 USD seems like a steal. You can watch our video review here.

At first glance, you wouldn’t think the Corsair Virtuoso Wireless SE was a gaming headset. Featuring an aluminum body finished in gunmetal gray, this wireless gaming headset looks and feels like a million bucks… or at least $200 USD. Plus, it has RGB lighting embedded in the ear cups, allowing you to add a splash of color without turning the headset into a mini laser light show.

The headset is crafted for gamers of all platforms. Its primary connection method uses a 2.4GHz wireless USB dongle, but it also comes with a USB-C to USB-A cable and 3.5mm aux cable, both of which are capable of transmitting audio. 23 hours of battery life ensures that the Virtuoso will last multiple gaming sessions, even on a single charge, too.

Of course, we can’t talk about the Corsair Virtuoso Wireless SE without mentioning its microphone: one of the best we’ve ever tested in a gaming headset. A neutral frequency response ensures that your voice—high or low pitched—will be reproduced loud and clear. Although higher frequencies lack some detail, the balanced response in the low-to-mid frequencies means that your teammates are sure to hear your communiqués. Don’t just take our word for it. Listen to our microphone demo and hear for yourself.

A newer model of Virtuoso, the Corsair Virtuoso RGB Wireless XT is also available, bringing Bluetooth connectivity into the fold. Right now, we still recommend the SE model as it’s $60 USD cheaper and virtually identical for gaming. Just know that if you’re interested in the Virtuoso line, but you want something with aptX HD support, there’s an option for you.

A handful of good wireless gaming headsets support connections over Bluetooth and using a USB wireless dongle, but most of them charge a premium for what amounts to pretty meager options. The Turtle Beach Stealth 700 Gen 2 still offers only basic Bluetooth codec support, but at least it doesn’t gouge for it.

This wireless PlayStation 5 gaming headset comes with best-in-class, 35-hour battery life, and lightweight plastic chassis that makes long gaming sessions a cinch. The Stealth 700 Gen 2 also sounds quite nice, with amplified bass (maybe verging on over-emphasized), and accurate mids and highs, though its isolation isn’t great and may impact sound quality, depending on your environment.

Learn more: What is isolation?

Like a lot of Turtle Beach gaming headsets, this one also has a very accurate microphone, so you shouldn’t have any issues chatting away with your friends on Discord for hours.

The header pretty much says it all, folks. True wireless earbuds like the Apple AirPods are the hottest audio item in the world right now, and if you want something like that for gaming, there’s really only one place to look. The EPOS GTW 270 Hybrid is a pair of true wireless earbuds that also pairs to USB-C dongle for lag-free audio over aptX Low Latency.

These true wireless earbuds are admittedly a bit befuddling. As a regular Bluetooth device, the GTW 270 Hybrid isn’t bad. It sounds pretty nice, it’s IPX5 rated, it supports aptX and Bluetooth multipoint, and it’s comfortable. Its battery life isn’t fantastic, at just shy of 5 hours on a single charge, but pretty normal for true wireless earbuds. The microphone isn’t great, but few embedded microphones are.

However, when you’re gaming the experience shifts pretty dramatically. As a pair of gaming earbuds, the GTW 270 Hybrid works well—it still sounds good, and it maintains a steady, lag-free connection to its dongle. However, as aptX Low Latency doesn’t support microphone audio, the microphone stops working when you pair with the dongle, so voice chat isn’t an option (the multi-function button also stops working, but that’s less of an issue).

Basically, if you don’t mind spending this much money on earbuds without a microphone, you should enjoy this one quite a bit. 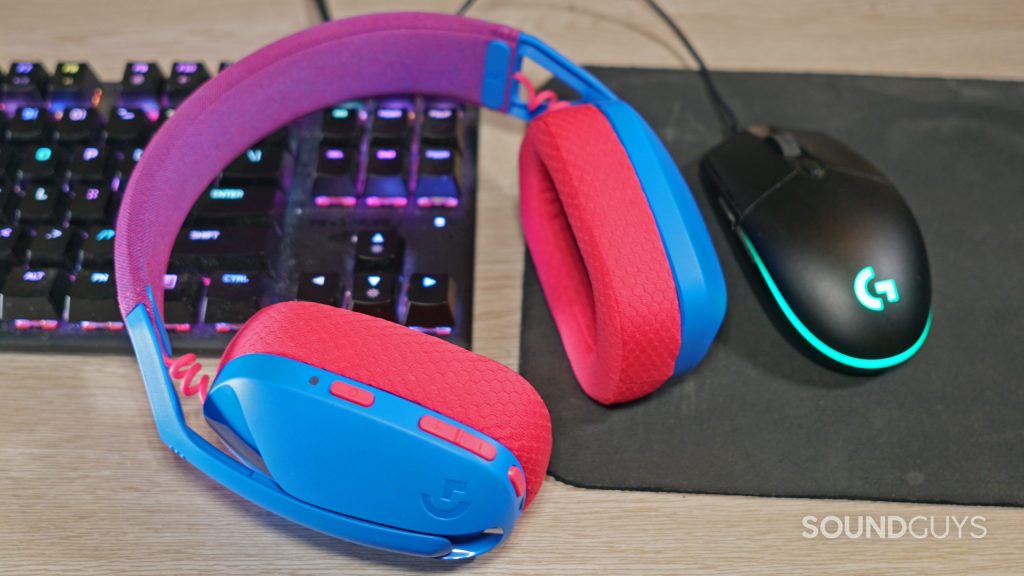 This is a nice fit for lengthy gaming sessions.

Should you get the Sony PULSE 3D Wireless Headset for PlayStation 5?

This is definitely a headset aimed at couch-bound gamers.

The PULSE 3D Wireless Headset is Sony’s specific headset for the PS5, but it isn’t as great as you may hope. The best thing about the PULSE 3D Wireless Headset relative to its competitors is that it matches the console’s color scheme. Its other redeeming quality is its lightweight build, but it otherwise doesn’t outperform alternative headsets when it comes to sound or mic quality, and certainly not when it comes to cross-platform compatibility.

Why you should trust SoundGuys

Like all of our best lists and reviews, none of our writers benefit from championing one product over another. We adhere to a strict ethics policy. If we award something, it’s because it’s a good product—simple as that. We subject each product that comes our way to a battery of tests that are appropriate for its specific category.

The gaming headset space, much like many other parts of the audio industry, is rife with exaggerated language and gimmicky features that often don’t add much of anything to your experience. It’s easy to get caught up in the flashy lights and promises of immersive audio and bass so intense it’ll rupture your eardrums (in a good way, somehow), but most of that stuff flat out doesn’t matter. That’s why we review headsets, and why we have lists like this.